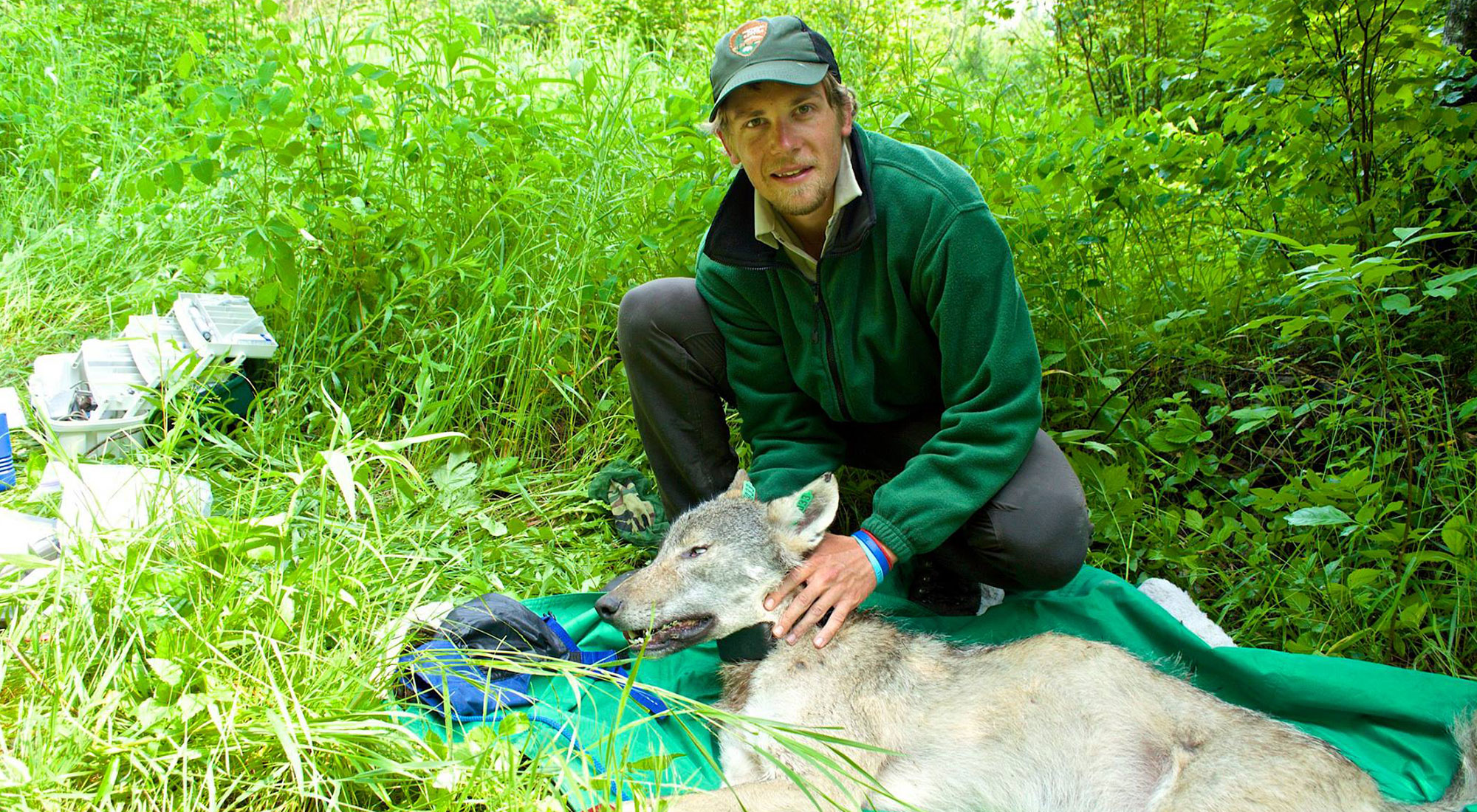 Austin Homkes ’10 was enjoying just another day at work when he spontaneously let out a short wolf howl. To his surprise, six wolf pups emerged out of the brush and ran around him with an eager air of investigation. Once satisfied, the pups returned to their denning area in the brush. Intrigued, Homkes lingered and an adult wolf appeared, joined quickly by the energetic pups. Homkes stayed until the mother wolf left, then let out a goodbye howl as he walked away. At once, all six pups responded with howls of their own.

By now, you probably figured out that Austin Homkes does not have a “normal” job. Austin’s official job title is “Wildlife Science Technician” at Voyageurs National Park in northern Minnesota, and his workday is primarily devoted to the Voyageurs Wolf Project. The Wolf Project is a research collaboration between the National Park Service and the University of Minnesota staffed by Austin and another PhD student (both Hope College grads) and requires a great variety of skills, stamina, and expertise all utilized to better understand wolf behavior and pack health.

Voyageurs National Park is connected to the better known Boundary Waters Canoe Area Wilderness and the Quetico Provincial Park in Canada, composing a vast swath of lake country. Encompassing hundreds of small lakes with rocky shorelines and surrounded by dense coniferous and deciduous forests, Voyageurs National Park is one of only a few preserves that allow motor boats. “While the silence of ‘canoe only’ wilderness areas are certainly special, being able to get deep into the park in an afternoon is a huge advantage, especially for visitors who only have a few days,” said Austin, explaining why they allow motor boats.

Once deep in the park, visitors have the opportunity to see old growth forests and trees rarely available anywhere else. In fact, Austin is credited with having found the largest Jack Pine in America on one of his  excursions deep in the park. But that is another story. And this work is about wolves.

”…wild things and places have an intrinsic value simply by existing. In other words, wild things have value to humans simply by being wild.

In the late spring between April and May, the work consists mostly of collaring wolves with GPS collars that give researchers updates on the wolves’ locations every 20 minutes. From May through the end of October (or when the lakes freeze), Austin and his colleague follow and track the wolves looking specifically for locations where two or more wolves are in a small area within those 20 minute updates. These groupings can indicate a bedding area or a kill site revealing important information about behavior and the pack. Kill sites are particularly important to the researchers as the summer dense forests of Voyageurs reveal very little.

Knowing where those sites are through GPS allows Austin precise data to find and then examine dens, prey, wolf numbers, and even find wolf pups. But that work is hardly easy. And that is part of the allure.

“What I like most about my job is that I get to spend almost all my time hiking in the woods in deep wilderness and see the intimate places and habits of a very private animal,” Austin said. “It is not uncommon for me to spend 50 hours a week in the woods, off trail, hiking 10 to 15 miles a day. In doing this, I really get to know the land, know the wolves, and develop a deeper knowledge of nature that can only be acquired by thousands of hours in the woods.”

”HCS prepared me for this work by instilling in me a sense of professionalism, a desire for excellence, and a character of integrity and honesty.

The downside? Bugs. And rain. “After many hours in the woods, day after day, the weather and the bugs can wear on the mind and body,” he admitted. Fortunately, he can unwind at his home just north of the park with his wife and dog, about 25 minutes from the nearest town, International Falls, Minnesota.

As the seasons change, so does some of the work. Austin and his colleague still chase wolf packs in the winter, but use snowmobiles instead of boats and boots, and split their time between collecting data and analyzing it. He said, “This is very important information for understanding the health of a pack. We need to know how many wolves there are to catch and collar in each pack and how many adult wolves will be supporting the pups in the spring. We also set up a lot of remote trail cameras for the same purpose. We end up finding a lot of winter deer kills in the process, from which we collect information relating to the locations of the kill and the condition of the deer that was killed.”

Winters in northern Minnesota last a long time and can be especially frigid with full weeks below 0 degrees and routine -20 degree mornings.

But the hard work is also what makes it both rewarding and valuable. “The work my team and I do is important because I believe that wild things and places have an intrinsic value simply by existing. In other words, wild things have value to humans simply by being wild,” explained Homkes.

He further noted that a thriving wolf population requires a large and pristine wilderness either unaffected by human activity or carefully stewarded to allow for the right environment. Given the current human population and its projected growth, the second option is becoming more the norm.

And careful stewardship of any kind whether it be environmental, financial, spiritual and even wolves requires expertise. “It sounds harsh,” said Homkes, “but the real world doesn’t mess around with mediocrity. You actually have to be good at what you are trying to do, you actually have to bring value to the table wherever you try to plant yourself.”

Austin credits HCS in part for that dedication to excellence: “The specialized skills came later, but the solid foundation began at HCS. HCS prepared me for this work by instilling in me a sense of professionalism, a desire for excellence, and a character of integrity and honesty.”

Austin went on to praise the communications skills in writing and speaking that he learned at HCS, as well as the desire to do well and learn as much as possible—not just the minimum—besides a solid understanding of the sciences (with a shout out to Mr. Dewey, a former HCMS science teacher) that he received at HCS as major takeaways from his K-12 education.

Even more than that, he found not just an occupation utilizing his skills, but a vocation: “As Christians we are called to be stewards of creation. I view wildlife research and management as a big part of the call. Followers of Christ are called to be a light wherever they are called to be, and that’s what I strive to be as a wolf researcher.”

His advice to current Holland Christian students? Keep trying different things. Be open. Take risks to uncover unknown interests. “While you’re still young, try as many things as you can, before you make it to a point in life where you start having to make choices of what you want to do with your life. Be willing to work for free. It starts with experiences, trying things out, finding out what you like,” he advises.

And that may just lead you deep into the northern hardwood forests, giving out wolf calls to be joined by pups eager to discover who was making all the noise. Or anywhere in the world, serving the Lord and committed to being the best light possible.

We really didn’t have enough room to give you all the cool nitty gritty details about Austin’s work, so if you’d like to read more about his research with the Voyageurs Wolf Project, it’s been hitting a lot of national news lately. Check out PBS’s program “American Spring Live,” or a June National Geographic article “The secret lives of fish-eating, beaver-ambushing wolves of Minnesota.” Another great recent article, “The secret summer lives of Voyageurs Park Wolves” was in the Duluth News Tribune, or visit the “Voyageurs Wolf Project” Facebook page.