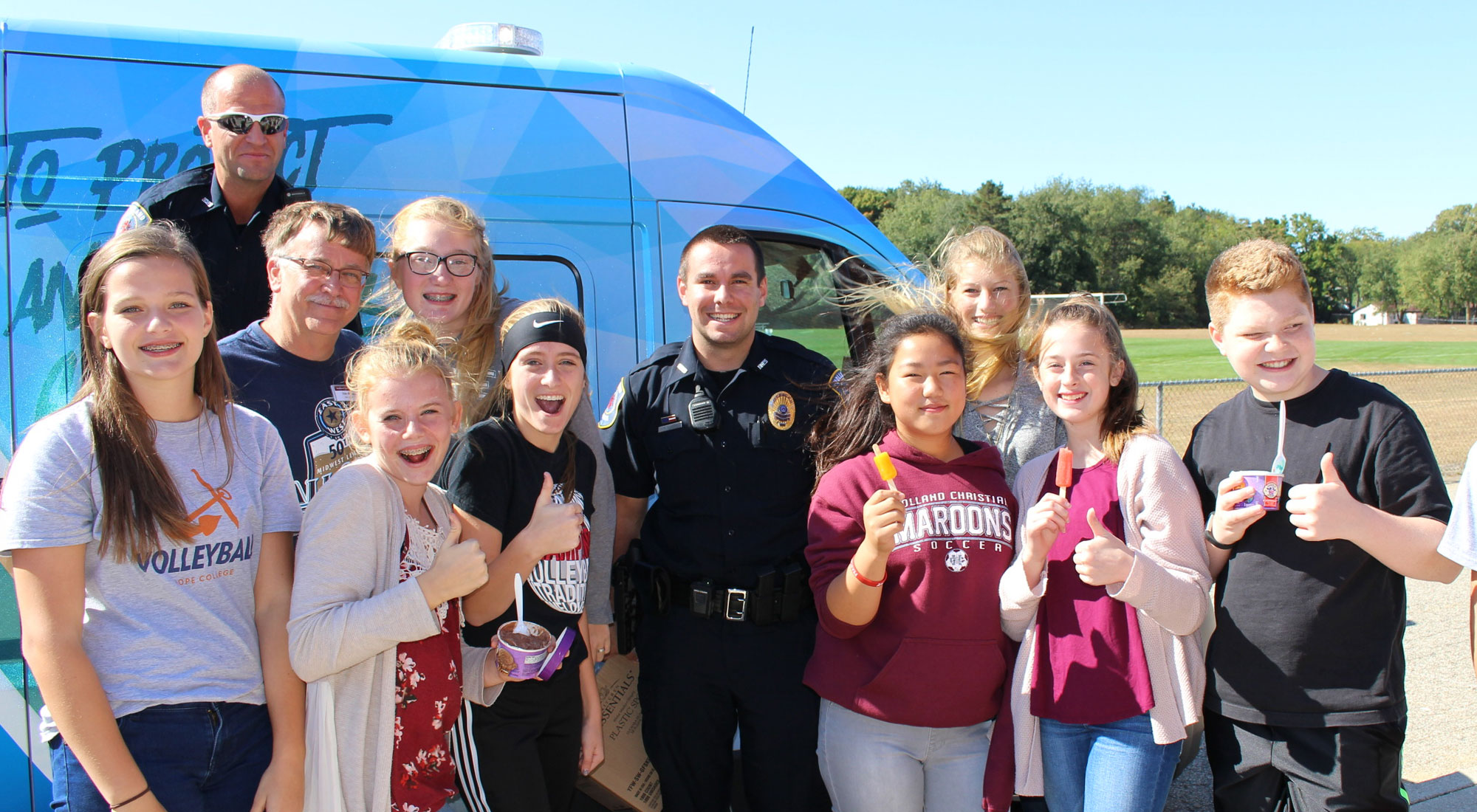 Just maybe there’s a surprise in middle school life better than a free ice cream truck showing up your last afternoon class on a glorious October Friday. But not many.

Then make it courtesy of your local Holland Police Department (HPD), and the officer handing out the free ice cream happens to have graduated from your school, oh, about two decades before. Totally cool.

Maybe not what you’d expect from your local police? But that’s one thing the Holland Police Department seems to be particularly  good at—surprising and breaking stereotypes, both consciously and unconsciously.

“It’s important in this day and age to be making positive contacts,” said HPD Officer Dan Keuning ’96, the one handing out free ice cream cones. “If you get ice cream out of that truck, you don’t forget it. And it provides us that opportunity to have positive contact in a non-confrontational way, to show that we are the good guys.”

Only the fourth police department in the nation to do so as one element of community policing, the HPD launched their free ice cream truck, the “Polar Patrol,” this June after receiving donations from area businesses, including the vehicle, vehicle graphics, and of course, lots of ice cream.

“We were hoping to be the first in the state,” Keuning grinned competitively, “but we were second. One other department beat us to it while we were in the application process.”

”It provides us that opportunity to have positive contact in a non-confrontational way, to show that we are the good guys.

“We want people to see us as a person, so they’ll get a better idea of what we’re doing,” added Capt. Keith Mulder ’88. “Those who don’t have any officers they know personally, fill in their own blanks.”

Curiously, over a quarter of the 60-member Holland Police Department graduated from Holland Christian Schools—twice as many as any other high school represented in the department. Furthermore, there seem to be few Christian schools across the nation with as much pride and affection for, or connection to, their local police department as HCS seems to have for the HPD.

“I remember doing those service hours back in high school. ‘Servitude’ I think we called it then? But here we are still serving—it got ingrained in us a little bit,” said Mulder.

”Treating people well is something I would say we learned from Holland Christian—you’re more compassionate because of your faith.

“Not everyone has the upbringing that most HC students have—with the school support and the home support,” said Officer Joy Nelson ’96, currently a booking officer who receives arrested individuals into the Holland jail. “People I’m booking say all the time, ‘Thank you for being so nice.’ Treating people well is something I would say we learned from Holland Christian—you’re more compassionate because of your faith.”

Plus, did you ever think of your police officers actually praying for you? Nelson added, “It’s not unusual to hear officers say to people they just arrested that they’ll pray for them, and people are pretty thankful for that.

“By the time they get here, they realize they messed up, that they made a poor choice, but you can still treat them with respect, offer forgiveness to people if they ask for it,” Nelson said. “As a Christian it’s good being able to sympathize with them a little—plus it’s not always not HC people going through here!”

One of the reasons many of the HC grads went into the HPD is because they “love the area” and “want to help people,” to be a positive contributor to their community.

When the national media floods with police shootings and beatings, showcasing police in a negative light, treats and cards of support show up in the HPD break room, delivered from local community members. Especially just after September 11.

“People around here truly do support the police, and that helps,” Nelson said. “I can’t imagine working where there are riots that are so anti-police—it would be hard to have so many people be angry just because of your career. We definitely feel the support!”

And it’s not like they don’t see everything that bigger American communities and police forces deal with, just maybe not as much of it. “People have no idea about the ton of crazy stuff we run into!” said Mulder. “You never know what’s coming next, but that’s what keeps the spark, the excitement—there’s always something different.”

“We live in a very broken world, and it takes a unique skill set to work with that every day,” said Captain Rick Walters ’86. “What we do is so different from every other vocation.”

Most of HPD who are HC alumni don’t draw a direct connection between their HCS experience and their career choice, but agree that their training in compassion and integrity, their Christian awareness of brokenness and desire to help in the midst of it, led them in part to their career, as well as connections through their Holland Christian associated community.

“I’ve always been a hands-on guy,” said Cadet Spencer Slenk ’15, who “always wanted to go into law enforcement.” But he also credits his eighth grade HCMS Shadow Day for pointing him in the right direction, as well as his friendship with Keith Mulder’s son Nate Mulder ’15, who invited him to assist with the scenario-based Police Academy training when he was a junior in high school.

”The faith community here is a lot different–how we treat people and interact with them. Something’s different about this place to outsiders.

A lot of them became interested in police work through Joe Slenk’s dad, Dave Slenk ’68, who first worked for the Michigan State Police, then spent the last 15 years of his career at HCHS as the Director of Student Safety, a fundraised position that was dropped when he retired after 15 years.

Most of them have four year college degrees from places like Calvin, Hope, Grand Valley. Several, like Walters, who started out as an accounting major at Calvin, realized a couple of years in that their first career choice just wasn’t going to work for them, that they would prefer a career with a little more unpredictability.

So it’s not like they all planned this back in high school together, to all work together for the HPD. It just somehow serendipitously happened.

“I work closely with four people I graduated the same year from high school with—four very different people with different friend groups back in high school,” Captain Mulder said. “I never would have thought back then that I would be working with these people. But you start to see different things in people that in high school you just weren’t aware of. We get along great now, and work very well together.”