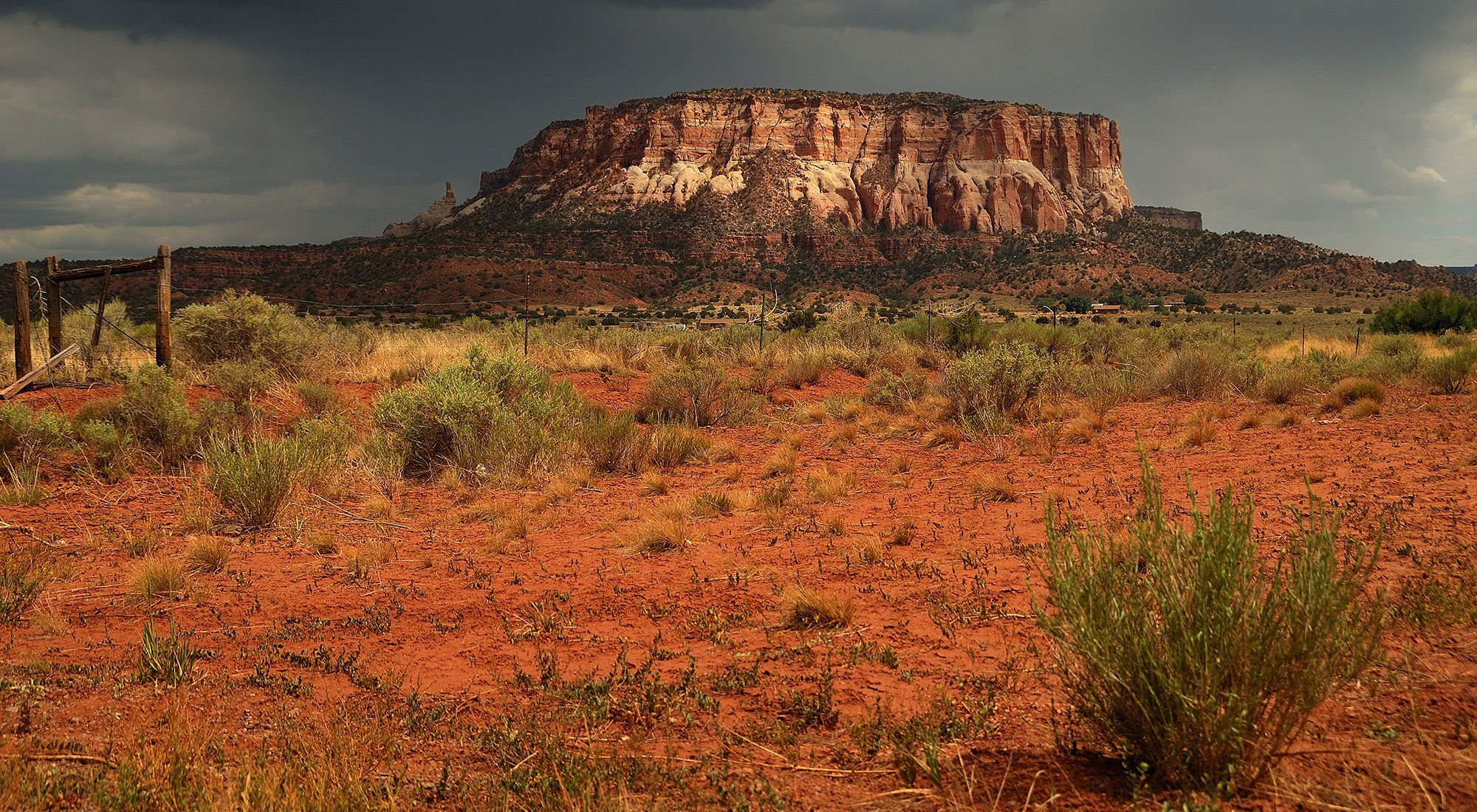 Tim Becksvoort ’93 enjoyed his math and Bible teachers so much at Holland Christian High School that he decided to become one.

So after four years at Calvin College, that’s what he happily did for the next 19 years at Valley Christian High School in Cerritos, California. He and his wife, Michelle, settled contentedly into the community there and their three children were born there, while he taught the unusual combo of math and Bible to high school students. Together they enjoyed their church community, leading Cadets, and made dear friends. Life was on a good trajectory and they didn’t plan on leaving it anytime soon.

Until a fateful spring break five years ago.

Every spring, a group of students and teachers from Valley Christian School take a spring break service trip to Zuni, New Mexico, to help out in the Christian school there, Zuni Christian Mission School (ZCMS). The high school students and teachers lead an alternative curriculum of things like rocketry, butterflies, and cooking, and play with kids during recess, helping out with whatever ZCMS teachers need. About five years ago, the Visalia teacher in charge of the trip was pregnant and wanted Tim to cover for her—maybe for just the year, maybe permanently in the future, but talked him into going on the spring break with his whole family just to check it out.

So they did. And came away totally impressed with the ZCMS staff and their important work. At the end of the week, right before driving off back home, Tim walked into the then-ZCMS principal’s office, Kathy Boscher, to encourage her with Hebrews 6:10, that “God is not unjust, he will not forget your work and the love you have shown him as you have helped His people and continue to help them.”

She thanked him politely, but then leaned across her desk, and—over 70 herself and overdue from her own retirement, she asked Tim, “Have you ever thought about doing this?”

“And I said ‘NO!’” Tim laughed, since he was happy teaching and definitely not interested in administration. But then, just trying to get out the door and head home, “We agreed to pray about it—and that was our biggest mistake!” he said.

Maybe some of you already know about Zuni, or have been there. But for those of you who don’t or haven’t, it looks a lot like the traditional pueblo towns you saw pictured in your fifth grade social studies book describing what pueblos are: Red adobe apartments stacked on top of adobe houses below, wooden ladders connecting the two. Rounded horno mud ovens in the yards with packs of dogs circling around, and a dry river bed curving through town flowing with water only in rainy seasons. English is spoken, but it’s still mostly Zuni heard around town, or maybe a mix of the two. The main religion of the community is the same one practiced by Zunis for centuries, even millennia— a secretive animistic ancestral worship. During traditional Zuni religious times, you might see a mudhead or a kachina walking down the street, or hear the ritual chanting coming from the kivas a couple of streets over. Just a little different from California?

But over the next year, Tim and Michelle wrestled with this call, having zero desire of their own at that point to uproot their three children and move from a pleasant California life to Zuni. But God wouldn’t leave them alone.

“There were a series of nudges all in the same direction that accumulated into something ridiculous,” Tim said chuckling. Throughout the next year, even though they didn’t tell anyone of the offer, people said the most random things to them about going into administration or New Mexico, or devotions repeatedly happened to be from Genesis 12 where Abram and Sarai pick up and move, following God’s command. “God just kept at it!” Tim said. Finally he and Michelle realized “if we don’t pursue it, it felt like we were going to be disobedient.”

And now, four years later, they’re appreciating their front row seat watching God at work—both in their own lives and in their new Zuni community. Because Tim took the job as the elementary principal at ZCMS—a seemingly ridiculous thing for a high school math teacher, and they moved their three children, now aged 17, 14, and 11, to Zuni, NM, population 7500. And Michelle started teaching first and second grade there, and both coach the cross country team together.

”We know that we’re in the center of where God wants us right now—and that’s incredibly freeing when you know that.

“The first year was baptism by fire,” Tim admitted. Besides learning elementary administration on the fly, “There were all kinds of things I had to deal with—drugs on campus, moms of two students died, I had to remove a student— there was lots of agonizing over those things.”

But it also “was a big lesson for me—of my second hand arrogance,” he added. “A reminder that God can work [in all things.] The key ingredient is the Holy Spirit working— you’re key and important, but you are not the Holy Spirit!”

Besides diving headfirst into the community, Tim learned administration through programs like the VanLeeuwen Fellowship and CSI’s PDI leadership program, but the Zuni language and culture were a little trickier. Tim took a Zuni language class and “was the only white guy in it,” he said. “We had to give a presentation and I made all kinds of mistakes—but decided I can be offended every time they laughed, or go with it—so we would just laugh together and go on!”

But what surprised Tim and Michelle the most that first year?

“Consistently the number of kids who were super excited that it was Monday morning and they got to come to school,” he said. “School is the healthiest thing in their life. Things often descend into chaos for them on the weekend.”

So then imagine trying to lead through COVID this past school year.

“There was no roadmap for this,” Tim said. “With God’s help we did it—with His guidance and protection every step of the way.”

Because COVID hit Zuni hard in June of 2020, right at the summer solstice during traditional ceremonies and gatherings. Some traditional Zunis refused to get tested for COVID, believing their gods would protect them and prevent any spread of COVID. Instead, “it spread very quickly,” Tim said. Such that “everybody knew someone who died from it or had it really bad. The fear was off the charts.” Many Zunis believed that they had done something wrong, Tim explained. “The religious elders were saying we need to dance harder, to do more so that we don’t have bad things happen. It’s really a religion with fear.’”

In the midst of that Tim and his team were still trying to educate kids, to provide a safe place, and represent Jesus while remaining culturally sensitive and aware.

“We said ‘Let’s not run ahead of our community,’” Tim said, explaining that when COVID first hit, they had gone completely virtual, but only about 50% of their students had any internet access.

So teachers started out the new 2020-21 school year teaching through packets, and families picked them up every two weeks, turning in the school work they had finished the previous two weeks. A few months in, the school was able to have two different cohorts of students each come to school for two days.

But just as they were getting back into the new norm, the Zuni Shalako and winter solstice ceremonies happened in December, people gathering in large groups and without masks—since many tribal leaders forbad them in traditional ceremonies—and there was another huge spike of COVID in Zuni.

”It also was a reminder that God can work [in all things.] The key ingredient is the Holy Spirit working— you’re key and important, but you are not the Holy Spirit!

Tim and the teachers decided to go remote again—both to keep the kids, as well as the mission safe. “We did not want [Zunis] to connect COVID to the mission, so they could blame us if students got sick, saying ‘What did Jesus do to us?’”

When things were looking better in April, the school was able to return in person, at first in cohorts, but by the end of the school year all students together, and all with masks, and they look forward cautiously to this school year in person as well.

And the Rock is holding. “We know that we’re in the center of where God wants us right now—and that’s incredibly freeing when you know that.”